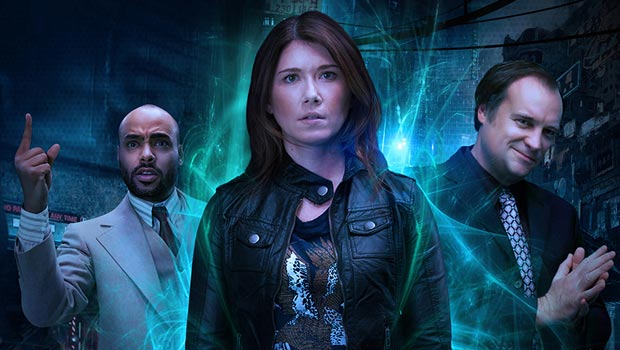 State of Syn isn’t an ordinary series. There are episodes with a stylistic approach that feels more like a video game than a webseries, a mobile app where you unlock puzzles, and a Google Glass app currently in development. State of Syn stars Jewel Staite (Firefly; The L.A. Complex) and David Hewlett (Stargate SG-1; Stargate: Atlantis).

@ThisIsTM: The episodes are in a style you call “3D-enabled motion novel.” What were some of the creative reasons for choosing this style over traditional video?

We were interested in exploring a different form of storytelling. We looked at what was out there on the web already and choose a format/style that we thought would really stand out in the space.

@ThisIsTM: The app (iOS & Android) is sort of a first person adventure game where you’re given bits of narrative and need to solve puzzles or unlock clues to advance. Do the challenges in the app tie into the episodes on YouTube and Hulu (or vice versa)?

The App, entitled “The World Outside,” is based around subject Sixty-Three and tells the prologue to the series, giving you greater insights into some of the series’ storyline origins. The game mechanics do not tie directly to the series but you can purchase the “synesthesia” layer – the same trait held by the show’s lead protagonist Annika Drake. Like Annika in the series, using synesthesia helps you solve puzzles and problems by seeing hidden messages and clues.

@ThisIsTM: It’s exciting that you’re developing a Google Glass app for State of Syn. What are some of the challenges of creating a narrative for a wearable device?

Like the App, we are blending storytelling and gaming for Glass. Some of the challenges are technical – there isn’t a lot of storage space on the device, which limits the amount of video. Other challenges are user-based – time engagement is a lot different than using your phone. We aim for 60 to 120 seconds per engagement, because when you are wearing a computer on your face and using your vision, you don’t want to be overburdened. Gameplay is also different, as your controller is your own head and vision.

@ThisIsTM: In one video on YouTube, a masked figure with a disguised voice personally thanks individual fans. Are there plans to encourage fan-generated content or some sort of audience participation?

Certainly. Social engagement has been a big part of this project from its initial launch prior to Comic Con and will continue to be. Once the series launches on Hulu and the full series has been viewed, we will be launching further initiatives that encourage our fans to create their own content and play along with us within the larger storyworld.

@ThisIsTM: With an episodic series, mobile game, and wearable computing app, what excites you the most about telling stories using emerging technology?

The freedom to work without boundaries. A TV show requires 44 minutes of content and follows a very particular set of “rules” and “guidelines.” Here, using all these new emerging technologies, there are no rules other than to tell a story people want to hear in the ways they want to hear it. It’s very liberating and creatively rewarding for the entire Smokebomb team.

Working with less. The CMF, OIDMTC, CFC and our parent company Shaftesbury have been great supporters of this project but we are certainly working with a fraction of a single television episode’s budget. So there is something about weaving deeper stories and working with less. Especially when it comes to our social initiatives, the Smokebomb team has really enjoyed developing and releasing content that is economically small but with big impact. There will be more of this to come.