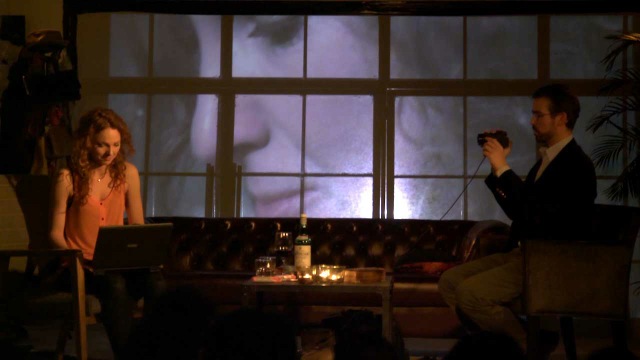 Michael Beets is an Australian film/theatre director based in Shanghai who has made transmedia stage adaptations of Jean-Paul Sartre’s No Exit and Theo Van Gogh’s Interview.

@ThisIsTM: What inspired you to take a transmedia approach with your theater productions No Exit and Interview?

It actually began as more of a character study for the actors in ‘No Exit’, and I found that the content they were creating for their character development was enabling me to see the world of the play in a whole new light. I figured why not release this online, and invite the audience to join in on the journey from an earlier point. The ‘No Exit’ platform was more of a blog, and didn’t really allow much opportunity for the audience to get involved. ‘Interview’ was a bit more of a transmedia approach where we spread content through multiple channels such as a website, a Facebook account and an event which all added to the performance.

@ThisIsTM: Was there anything you learned from those productions that you wish you’d known when you began?

It’s all a learning curve really. With ‘Interview’, I wish I had spent more time on the development of the character over social media sites like Facebook instead of the creation of the ‘celebrity website’. Looking back I can see that the website was actually quite redundant as most of our audience was on Facebook anyway. If I had to go back and do it again, I would make more of an online story that somehow connects to the performance in a more fluid manner. With both previous projects the transmedia stuff was kind of similar to bonus content on a DVD, and it didn’t really add to the storyline. So yeah, make every piece of content integral to the story.

@ThisIsTM: You were invited to submit a project to the Sundance New Frontier Story Lab. How have you approached your pitch idea from a creative perspective?

First of all this project I am pitching is all original content, which is great because everything we are creating is moulded around this idea of storytelling across platforms. Before, I was looking at the theatre show being the main channel to express the story but now I am looking at the theatre show being one of many channels that all come together equally as part of the story world.

I am also blogging about the process of the entire project and inviting other transmedia enthusiasts to have a read, and hopefully begin a discussion about some of the ideas that are being thrown around.

@ThisIsTM: Any advice you’d give to someone who is considering incorporating a theatrical experience into their transmedia project?

To be honest I am really new at all this and I feel like its all just an experiment to test out new ways of playing with theatre. Of course theatre will always exist but we live in an exciting time where technology is able to add to a story and not subtract from it. I guess my rookie advice would be- test your audience.

Apart from the site which is where I am going to be focusing most of my attention for the next month, you can follow me on twitter @michaelbeets, or you could check out my website michaelbeets.com

Interviews
One comment on “Interview: Theatre and Transmedia with Michael Beets”